Ellen Mayer was born in New York City. Her work has appeared in group and solo shows at Papp Gallery, Midoma Gallery and A.I.R. Gallery, New York City. Ellen Mayer has also exhibited at the Lycian Theater, Sugarloaf, NY, Varga Gallery, Woodstock, NY, Winslow Therapeutic Center "Healing with Horses" Warwick, NY, Harness Racing Museum, Goshen, NY, Howland Cultural Center, Beacon, NY, Newburgh Art Gallery, Newburgh, NY, Painter's Gallery, Cornwall, NY, Hambletonian Fine Art Show and Competition, Sugar Loaf, and many others.Ms. Mayer was featured in a full page article in The Times Herald Record, Middletown NY about her painting "Seeing Red" and the events which inspired and influenced her work. She was also featured and Published in the Art Now "Gallery Guide", published in "Gallery Bill", and published in the Art Now "Gallery Guide".She provided watercolor illustrations for the gown worn by the actress Renee Taylor for the 2002 Academy Awards and Liza Minnelli’s wedding in 2002. Ms. Mayer returned to school in 1998 and received a degree in May 2001 for Visual Communications. She graduated with honors. Ms Mayer is also a Graphic Designer who incorporates her talents to make one of a kind designs for corporate and private clients. Currently 2016:  Ellen Mayer will have a permanent installation in Indianapolis which will stand 10 foot by 22 feet.

Ellen Mayer, interviewed on being an artist by Toni Quest.
Click on the PLAY (black arrow) button below. Ellen appears around 0:43sec.

Ellen with The Window Gets Smaller Painter and graphic artist Ellen Mayer has an effervescent personality and an infectious smile. When she speaks, her joy for life pervades her every word. However, for those who live by seeing only the surface of the worlds around them, Mayer’s emotive, impressionistic paintings stand in stark contrast to any first impression of her.

Using a palette of vivid, robust, sometimes dark colors, her portraits of individuals and groups staring out of her canvases have been described as being full of angst, tension, sorrow, and fear. Yet, Mayer states her paintings have their own strength; some are filled with specks of light that signify there is always hope. Her compositions are windows by which we can view people whom in our everyday lives, we would either be blind to, or, would simply choose to ignore.

As a young adult, Mayer says she led a ‘homogeneous white bread’ existence walking through life with a smile on her face, but her external façade including her early paintings, did not reflect her inner reality. Evolution came with the passing of her mother. Mayer’s subsequent paintings began to reveal her visceral connection with people of diverse ethnic and socio-cultural experiences.

Art has always been a part of Mayer’s life. Her talent was initially recognized in elementary school. By her high school senior year, she was able to design her course load so she could concentrate solely on art classes. Upon her high school graduation, she worked briefly as a secretary and then as a fashion illustrator.

At the age of 28, Mayer started working as a freelance, commercial artist. She moved to Chester, New York, in the late 1970s and continued working on a freelance basis. She began seriously focusing on her painting in 1993. When the advent of the computer signaled the end of ‘hand work’ for many commercial artists, Mayer met the challenge head on by enrolling in Orange County Community College, and obtained an Associates Degree in Visual Communications with Honors. She then began to incorporate her new computer graphic skills with her painting and segued into graphic design by specializing in designing marketing and branding identities for companies and organizations. Her client list includes Jubilee Presents: Multi-Cultural Arts and Foot Hills Country T 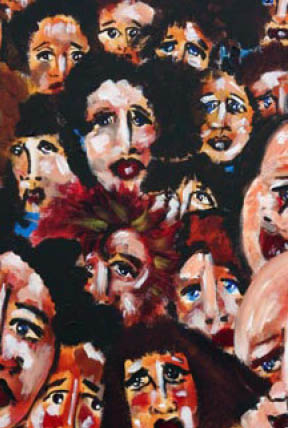 Facing Blue, A Work in Progress by Ellen Mayer Four years ago, Mayer was diagnosed with GIST – gastrointestinal stromal tumor. While still recovering from her initial surgery, Mayer was faced with an upcoming exhibition at the Newburgh Free Library. She says completing her work and getting through the exhibition showed her she could do anything. Even now, Mayer states the diagnosis has pushed her to be more productive, stating her work both as a graphic designer and as a painter has “tripled.” Using art not only as a cultural statement, but also therapeutically, one of her works entitled Living with Parkinson’s: The Window Gets Smaller is dedicated to her younger brother Marc Miller. Originally painted during a particularly trying time of his treatment, Mayer says he successfully underwent surgery last year freeing him from the disease’s debilitating affects.

For future artists, Mayer stresses the importance of being your own strongest advocate – being passionate and committed to your vision – even if it doesn’t fit within others’ parameters. She observes in today’s marketplace, it’s not enough to be technically skilled and artistically creative, the artist must also be business-savvy and know how to market and promote oneself. 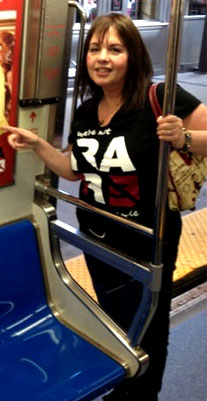 County Executive Edward A. Diana comments, "Ellen Mayer brings the faces of humanity to our gallery through her artwork. It is a truly powerful exhibit." 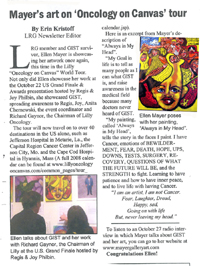